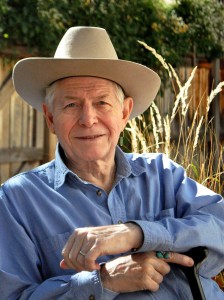 Terry Keepers is a wanderer, a tinkerer, a watcher of clouds, a lover of prairie vistas, and a pursuer of dreams and visions. Now retired, he fills his time reading, writing, and creating silver and gold jewelry. In addition to Homesteading the Soul, Keepers is co-author, with the late Dorothy Babcock, of Raising Kids O.K.: Human Growth and Development Throughout the Life Span. Terry and Dorothy traveled throughout the U.S.A. conducting clinical seminars in growth and development, Transactional Analysis, and parenting. He was a member of the American Psychological Association, the Colorado Psychological Association, the International Transactional Analysis Association and a co-founder of the Rocky Mountain Transactional Analysis Institute.

Terry wrote a series of articles for parenting magazines and his poetry has appeared in various publications. Terry, whose Ph.D. is from Case Western Reserve University in Cleveland, Ohio, conducted a Jungian Oriented psychotherapy practice for many years and founded the Colorado Family Center in Littleton, Colorado. He was on the Adjunct Faculty at the School of Professional Psychology at the University of Denver, and Naropa University in Boulder, Colorado, supervising graduate students during their clinical internships. Terry also taught a number of classes in shamanism at Naropa University.

He was on the clinical staff of several local hospitals and in demand as a speaker at local psychological institutions. He has been a student of Jungian Psychology and shamanic healing practices for many years. Recently, he has been furthering his education by reading the Iliad, Odyssey, Aeneid, Divine Comedy, and other classics. On his list to read next are Moby Dick, Tom Sawyer, Don Quixote, and Goethe’s Faust. An avid fan of Opera, he has been listening to radio broadcasts of the Saturday Metropolitan Opera Matinees for more than sixty years, and was a frequent attendee at the Santa Fe Opera in New Mexico. Other activities include intense study in Carl Roger’s Client Centered Psychotherapy, Freudian Psychology, Behavior Modification, Gestalt Psychology, Transactional Analysis, and a training analysis in Jungian Psychology. He was a member of the First West Coast Three Year Training Program in shamanism, conducted by Michael Harner, founder of the Foundation for Shamanic Studies, and subsequently participated in the Foundation’s Three Year Master’s Program.

Keepers was a founding member of the Boulder Shamanic Study group, a founding member of the Society for Shamanic Practitioners, and an active shamanic practitioner for many years. Terry was a long-standing member and leader in the Earthsong Ceremonial Community, a group exploring dance as a form of prayer and also attended many ceremonial events at Native American Pueblos and Reservations throughout the Southwest. As well, he was an active sculptor and artisan, studying for five years with a master goldsmith in Boulder, and selling jewelry and shamanic ceremonial instruments world-wide.  Terry’s art may be viewed on his website, Shamanic Arts Studio.

Fascinated by Alexander Calder’s Mobiles, Terry taught himself in this art as well, making and selling many sculptures. The pinnacle of this work was a collaborative mobile sixteen feet by six feet created with sculptor John Townley for the great hall at the Rockmirth Eco-Arts Atelier near Sapello, New Mexico, which John co-founded with poet Judyth Hill.

Born in 1937, Terry is a native of Colorado and currently lives in Boulder, with his wife of more than fifty years, Sylvia. His next book, which is in its beginning stages, is tentatively titled I Could Have Sunk Through the Floor: Identifying and Coping with Shame in Everyday Life. Eventually he may completely retire and find a place to sit in the sun and watch clouds.

When I embarked on this book project, Lissa Forbes, who has worked with me to bring my book into the world, took it upon herself to travel 117 miles to see Hugo for herself. Lissa’s On the Road to Hugo captures the essence of Hugo today in images and prose.

Click here to see Hugo, Colorado,
in Black and White