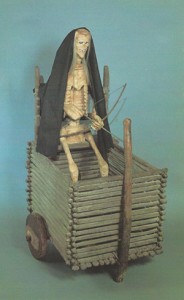 She first showed up at the Millicent Rogers Museum in Taos, New Mexico. I had just finished viewing a display of Pueblo Indian pottery and, turning a corner, I almost ran into her. On first seeing her I was taken aback—startled, then apprehensive, and finally curious. A gaunt and unpainted wooden skeleton, roughly hand carved and nearly life-size, she was seated in a coarse pine cart on the floor. Her empty eye sockets bored intently into my own eyes. Eyebrows and bony head were thick with coarse white hair flying wildly in all directions. Scrawny fingers held a poised bow, arrow at the ready. Her cavernous mouth and naked teeth grinned in ecstatic glee. The arrow was pointed directly at me. I had no framework to comprehend the force I was seeing.

A placard nearby enlightened me somewhat:

In Northern New Mexico and Southern Colorado she is honored in the Hispanic Communities, particularly in the Penitente Brotherhood, Los Hermanos de la Fraternidad Piadoso de Nuestro Padre Jesús Nazareno. La Fraternidad is a lay confraternity of the Roman Catholic Church. This order is related to flagellant orders dating back at least a thousand years in Spain. Today, the Brothers act predominantly as a beneficent and charitable organization in their communities. Doña Sebastiana is publically displayed principally during Holy Week processions warning people to keep their souls prepared for the moment when death strikes, even if it comes without warning . . . .

Her visage haunted me. I felt as if she wanted something, though I couldn’t tell what it was. After that, I didn’t think more about her until a few months later when I had another encounter this time in the Taylor Museum at the Colorado Springs Fine Art Center. This figure was strikingly similar to the one in Taos, though she carried a spear instead of a sword. Again, there was that gleeful look. The descriptive placard informed me that, as I had suspected, her scraggly gray hair was human. I was apprised that she was used in secret ceremonies by the Penitentes during Holy Week and that her cart was of the type used to haul corpses to their mass graves in the Middle Ages during the Plague. I left feeling unsettled again. Then she began showing up in my dreams. She was silent, yet emanated some extraordinary energy. A few months after this encounter, I was at the Denver Art Museum, where I discovered a recently opened gallery of Hispanic Folk Art. Intrigued, I entered the display and there she was again, in the middle of the room, spotlighted like a prima ballerina, center stage. She was larger than the other Doña Sebastianas and wore a flowing black shawl. This time she wielded an ax high overhead, ready to strike. Again, there was that fierce look of triumph. Clearly this is a woman who enjoys her work.

After this confrontation more dreams came. She never spoke, but seemed to make known that she wanted me to realize that she was an essential part of the cycle of Birth-Life-Death.

Later, while musing on the meaning of my encounters I recalled my experience at age fourteen when my Gramma Doyle, my mother’s mother, died. My two uncles took me with them to view her body at the mortuary. When we arrived, I was immediately repulsed by the hypocrisy of the sleek funeral home and the hollow consolations of persons who didn’t even know her. We were escorted to the viewing area where we were to view “the remains” in a fake bedroom. I was disgusted to see my beloved Gramma Doyle rouged up as if for Sunday Church and laid out in that fake bedroom as if merely asleep. Even at that age I recognized the repulsive lie that sought to deny the reality of Lady Death. The archetype that Doña Sebastiana personified was clearly excluded from this domain.

Best to end with a blessing:
When Death finds you, may she find you alive.

Click here to see Hugo, Colorado,
in Black and White